As I watch the tell-tale signs, listen to the whines and see the temperature right on the edge: I steal myself for what I know is coming. I think about our schedule for the next week and begin making mental adjustments, shifting to the plan B’s. I have to laugh a little. It’s so funny how we just know. We know when something isn’t right, how at first they are just ‘off’ and then our worlds stand still for a little while. This time it was Monkey, but more often than not it is Mr. Man. Let me go back…

My husband and I had gotten good. We could accurately tell you 3 days before Mr. Man would get sick. (What a talent, right?!) Usually, it would start with his behavior, his moods, etc. We’d make a comment and within 3 days he’d be running a fever. We had become pros at this sad little game because for over a year Mr. man would get sick every 2-4 weeks like clockwork. There was a time period when we could predict it to the day, that is how regular they became.

There is nothing scarier than sitting up with your baby, in the middle of the night, helpless to help them. Both boys have asthma; many nights were lost to listening for struggled breath. But the fevers were different. Monkey had constant ear infections, but when we’d take Mr. man in after 3 days of fever… Ears, fine. Throat, fine. “Just a virus.” JUST?! After about 6 months, I was tired of hearing the phrase ‘just a virus’. Mommy sense was calling BS. You don’t JUST get a virus every 2-4 weeks. No one gets that sick without there being more to it. “Well, he’s in daycare.” Yeah, great. I don’t see any other kids getting sick THAT often. There are so many other things that could be going on and I was furious the doctor wasn’t looking more into it. Here’s the thing… No symptoms other than a fever. When I say fever, I’m not talking the 101-102 range that people I know consider high. Mr. Man goes big or goes home. He was ranging 104-106. I remember several urgent care trips where we were held hostage because Motrin wasn’t bringing it down. The fever would last 3-4 days and he’d be back to normal. Eventually, (after I bypassed my primary doctor) we were given a diagnosis of PFAPA, periodic fever disorder. We began treating at the onset of fever, one (0f three) doses and the fever was gone, with hopes we could spread the fevers further apart until they disappeared altogether.

As I sat watching, Monkey struggle with this round of illness, I found myself wondering. When was Mr. Man’s last fever? I couldn’t remember… was that even possible? I pulled out the notebook I had been using to keep track. 3.5 months… 14 weeks! We had a round of strep throat in that time, but that is something else entirely. 14 weeks without “just a virus”. 14 weeks without the fear of 106, seizures and watching every 2 hours to make sure Motrin/Tylenol was bringing it down to 102 (which is his magic number that prompts vomiting). I hesitate to say he’s beat this battle, but I have hope. And if we’ve over come this obstacle…

Hope is a great thing. 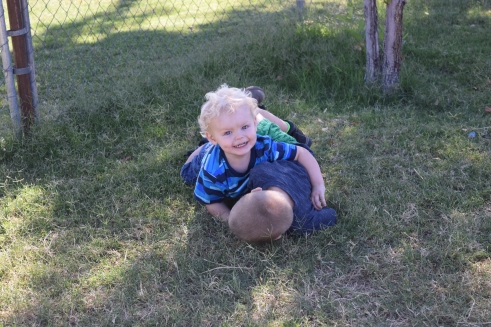 This was a journal entry I had written but not published. I wrote this approximately 6 months ago. In the past 6 months we have been “fever” free, other than the explainable bout with croup and other such expected illnesses.